How is the future going to build its cities? What visions do the experts of today have for the architects, designers and implementers of tomorrow? Max Farrell may have some of the answers. Founded by Max’s father, Farrells is a well known award-winning architecture and design firm with offices in London, Shanghai and Hong Kong. The rapid urbanisation of China’s demographical landscape has created huge opportunities for those in the urban development sector, as well as a great number of challenges. In 20 years, China's cities will have added 350 million people - more than the entire population of the United States today. By 2025, China will have 221 cities with one million plus inhabitants compared with 35 cities of this size in Europe today. At the start of this urbanisation process, many said it could not be done. Farrells responded by doing it.

“说某事不能做的人不应该干扰别人去” – The person who says it cannot be done should not interrupt the person doing it.

The legacy of Farrells is one to withhold with awe. Since its founding in 1961 as a joint effort between Sir Terry Farrell and Nicholas Grimshaw, the firm has built a strong reputation with a specialty found in the marriage of architecture with technology, culture and future-orientated planning. One such example is their new Shanghai project in conjuncture with Chinese real estate giant Wanda. Coming to Shanghai, the new Wanda Shanghai Wujiaochang Plaza will be a 15,000m2 fusion of time-honoured Chinese culture and landscaping tradition with modern technology bringing a truly 21st Century shopping journey to its future visitors. The sophisticated architecture with advanced technology will delivers an augmented and heightened experience to shoppers, ensuring this project will stand strong in Shanghai’s increasingly competitive retail environment.

Representing the scope of their operations in China, Farrells is also well established in urban development projects in Hong Kong, ranging from retail and commerce to art and culture. One such example is the stunning proposed M+ Museum to be situated in Hong Kong’s West Kowloon Cultural District. Embracing the plethora of mediums that the 21st century will bring to the world of art and culture, this project aims to fuse visual and performing arts into a truly unique platform in a global cultural epicentre.

Continuing Sir Terry’s legacy of quality and practicality, Farrells hasve embedded themselves in the urban development space, with the examples above paying testament to their great successes in both China and the UK. With huge attention being paid to urbanisation in China and the opportunities that this brings to the contractors of both East and West, Max Farrell is well placed to illuminate the challenges faced by the city and how best to embrace and overcome them. Invited to share his thoughts at the All Party Parliamentary Group for London’s Planning and the Built Environment in January 2017, Max offered a ten point strategic plan to steer future planning in London and the rest of the UK. 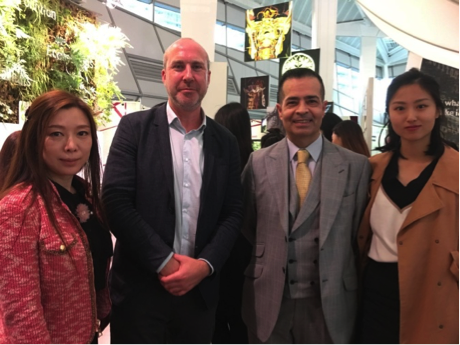 In a climate where environmental protection and urban planning now walks hand in hand, Max was quick to highlight the need to rethink urban environmental development. His pitch to develop ‘green braces’ rather than London’s ‘green belt’ pays testament to his modern innovative approach. Rather than a singular ‘silo’ of landscape development, Max urges that money available be focused on creating an interconnected network of green expanses to see London become the world’s first National Park City. These are not just eye-grabbing titles, but concepts reinforced by delicate and measured urban planning expertise that observes all future trends of the world’s big cities.

CBBF looks with great interest and enthusiasm to how Farrells will help reinvent ABP Royal Albert Dock into a bustling economic hub, fusing the economic interests of East and West at a time where internationalism and globalism is under such threat. Their legacy of cooperation and mutual benefit will serve as supporting pillars to future efforts to combine the capabilities of China and the UK for the benefit of future generations.

We at CBBF wish our partners at Farrells every success in all their inspiring and thought-provoking ventures.

The old Chinese saying has never been so true: “前人栽树，后人乘凉” – One generation plants trees so that the next may sit in the shade.